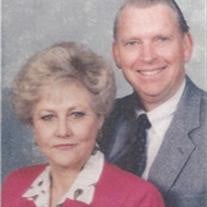 WEATHERFORD -- Rebecca Ann Anderson, 72, saw the angels that God sent for her and departed Thursday, June 3, 2010.        Funeral: 3 p.m. Sunday in Lucas Funeral Chapel in Hurst. Interment: Arwine Cemetery. Visitation: 6 to 8 p.m. Saturday at the funeral home.        Becky was born March 6, 1938, in Franklin to Wilson and Lorene Pack. She met Gene, her husband of 52 years, while living in Bryan. They moved to Hurst, close to Gene's job at Bell Helicopter, where she studied to be a nurse. She used those skills to raise three wonderful children. In 1995, they moved to a ranch near Weatherford.        Becky loved and served Jesus and people through responsible church positions, the last of which was at Emmanuel Baptist in Weatherford. To know Becky was to love her for she cast a sweet, sweet spirit for all to see. Earth's loss is heaven's gain where she now enjoys her glorified body.        Survivors: Husband, Gene; mother, Lorene Clegg; daughter, Sherri Oliver and husband, Larry, and their children, Courtney and Brandon Oliver, all of Weatherford; daughter, Kimmy Gene Anderson of Caldwell; son, Timothy Ray Anderson and wife, Carolyn, and their children, Adelyn and Wyatt Anderson of Bozeman, Mont.; brother, Milton Pack and wife, Geri, of Bryan; sister, Joyce Dunklin and husband, Bivin, of Tallapoosa, Ga.; and many other relatives and friends.

The family of Rebecca Anderson created this Life Tributes page to make it easy to share your memories.