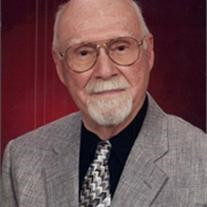 Robert A. "Bob" Balentine Jr., a retired U.S. Air Force lieutenant colonel, passed away Monday, Nov. 28, 2011, at his home. Service: Memorial service will be held at 10 a.m. Thursday at St. Paul United Methodist Church, 852 W. Bedford-Euless Road, in Hurst. Memorials: May go to the Hip Pocket Theater, Stage West or the Methodist Children's Home in Waco. Retired U.S. Air Force Lt. Col. Balentine Jr. was born in Fort Worth on June 28, 1922, to Robert A. Balentine and Vera Fowler Balentine. Bob grew up in Fort Worth, graduating from Arlington Heights High School in 1940. He attended North Texas Agricultural College, then a branch of Texas A&M, now UT-Arlington. World War II began his sophomore year and in the summer of 1942 he was married to Eleanore Smith. He served in the South Pacific. He was a graduate of the U.S. Air Force Command and Staff College and was on the faculty of the institution for four years. Retiring from the Air Force in June 1965, he was associated with General Dynamics Corp. as a technical writer for the F-111 aircraft. Bob was a musician and an actor and was associated with a number of theaters in the Fort Worth-Dallas area. He was a member and past president of the Mid-Cities Sonata Club as well as a member of several military organizations. He was ordained in the World Christianship Ministries and lectured on comparative religion at St. Paul United Methodist Church in Hurst for some years. He was preceded in death by his parents; his first wife, Eleanore; daughter, Kathryn Ohnheiser; son, Douglas Balentine; a sister and brother-in-law of Fort Worth; and a daughter-in-law, Patti Balentine, of Denton. Survivors: His loving wife of 30 years, Wanda; sons, retired Chief Master Sgt. Robert A. Balentine III and wife, Alyson, of San Antonio, Dr. James Balentine and wife, Cynthia, of San Antonio and Bruce Balentine of San Antonio and Europe; stepsons, Larry Hussey of Bedford and Steven Hussman of Arlington; 14 grandchildren; and six great-grandchildren.

The family of Robert Balentine, created this Life Tributes page to make it easy to share your memories.