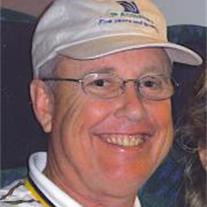 HURST -- Robert Frank Pryor, 46, passed away Monday, Aug. 27, 2007, at his home in Hurst. Funeral: 1 p.m. Friday at the LDS Hurst Stake Center, 4401 E. Loop 820 N., North Richland Hills. Celebration of life will be at 1 p.m. Saturday, Sept. 8, at First Baptist Church, 1400 Ninth Ave. N., Texas City. Visitation: 6 to 8 p.m. Thursday at the family home. Memorials: Contributions may be made to The Bob Pryor Young Athletes Opportunity Scholarship Fund at Liberty Bank, 5801 Davis Blvd., North Richland Hills, Texas 76180. Robert was born Oct. 5, 1960, in Texas City to Frank and Johnnie Pryor. "It takes a village to raise a child" aptly described his childhood and adolescent years as friends and family in Texas City helped him become the person he would be in later life. While young, he grew, and never outgrew, his love of sports. He proudly played on school football, baseball and basketball teams throughout his youth, which is why his family has decided to open a scholarship fund in his memory to benefit young underprivileged athletes. After high school he continued his adventures and met more lifelong friends at Blinn Junior College. From there, he transferred to Baylor, where in 1993 he received a B.S. in fashion merchandising. In 1987, he married Shelly Mitchell and in 1995, their lovely daughter, Kathryn Grace, was born. Although Shelly and he later divorced, his love for his daughter, Kate, never faltered. He worked in the clothing business for a number of years in Waco, continuing to make more lifelong friends. In 1994, he moved to Fort Worth and became involved in the car sales business. He had an incredible mind for detail and he filed volumes of information in his brain about his customers, associates and friends. He loved his job and loved people. Charming, funny and likable, he never met a stranger. As an eternal optimist, he never missed an opportunity to make others around him feel special. He loved unconditionally. His warm, wide grin, his spark, spunk and energy for life will be missed greatly. In 2000, he married Karen Kennedy and through thick and thin his soulmate stayed lovingly by his side until his death. On Aug. 14, 2006, he was diagnosed with stage IV lung cancer -- a complete surprise because he had never smoked a cigarette in his life. Looking back though, he saw that the diagnosis was the opportunity of a lifetime. He accepted the challenge with determination and courage. The cancer gave him permission to concentrate on his healing and on helping others. It was a signal to slow down and smell the roses in his life, a chance to really live. With gratefulness and joy, he moved forward, carrying precious lessons about life and love in his heart. In the past year, he and his wife lived life to the fullest. Maneuvering past three rounds of chemotherapy and two weeks of radiation treatment, they traveled to Italy, to Utah three times and to Hawaii for a cruise of the islands. Friends and family held celebration events for him in Texas City and in Waco, and his best friend, Gary, threw him the best birthday bash that he had ever received. Although there were a few bumps in the road, he couldn't have asked for a more satisfying life. Surrounded at home by love and family, he returned to his heavenly Father's embrace Aug. 27, 2007. Please visit www.bobpryor.blogspot.com. Survivors: Eternal sweetie, Karen Pryor; daughter, Kathryn Grace Pryor; stepdaughters, Kristen, Andrea and Hayley Kennedy; godly parents, Frank and Johnnie Pryor; beloved sister, Phyllis Bludworth and husband, Charles; nieces, Amanda and Emily; loving older brother, Dan Pryor and wife, Nancy; nephew, Tyler; and his best friend, Gary Marwitz.

The family of Robert Pryor created this Life Tributes page to make it easy to share your memories.