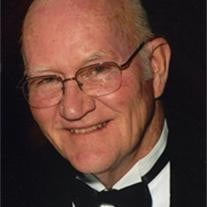 Roger B. Nielsen, 71, passed away in Mansfield, Texas on April 27, 2010. He was a beloved husband, father, grandfather, brother, and friend. He is remembered for his big heart, strong sense of humor and wit, "MacGyver-like" ability to create, fix and improve anything, and his love of golf and photography. All his daughters jokingly referred to him as "Mr. Manners". His love for his wife transcends all time and space - she was truly the "love of his life". Roger graduated from New Mexico Military Institute in 1956, and his Bachelors degree followed in Electronics Engineering from Northrop Institute of Technology. In 1970, Roger moved to El Paso where he worked at Johnson Space Center, White Sands Missile Range on the Apollo project. Following the cancellation of the Apollo program, he started Vogue Photography and was a partner in Keown-Nielsen Question Document Examiner for several years. He then became a real estate broker, opening Preferred Real Estate. He and his soul mate retired to Mansfield, Texas in 1998. Roger is survived by his beloved wife, Karin, and his daughters and son-in-laws: Sheryl and Vince Roman, Franklin, TN; Michele and Eric Rachie, Springfield, VA; Trecie and Ted Paradeza; San Antonio, TX; Becky and Jim Holland; Arlington, TX; and Amye and Reagan Pettey, Houston, Tx. Roger was adored as "Papa" by eight grandchildren, Jaylee and Jayden Holland, Arlington, TX, Mailisa and Mason, San Antonio, TX, and Hannah and Nick Roman, Franklin, TN, and Georgia and Emerson, Houston, TX. He was cherished by his big-sister, Carolyn Sedberry, Albuquerque, NM and "sister" and "brother" in-law, Linda and Andy Anderson, San Angelo, Tx. He was loved by wonderful nephews and niece: Heather Anderson, Abilene, TX; Shawn and Chris Anderson, San Angelo, Tx, and Leland, Bob, and John Sedberry, all of Albuquerque, NM. He is remembered and loved by many extended family members and close friends.

Roger B. Nielsen, 71, passed away in Mansfield, Texas on April 27, 2010. He was a beloved husband, father, grandfather, brother, and friend. He is remembered for his big heart, strong sense of humor and wit, "MacGyver-like" ability to create,... View Obituary & Service Information

The family of Roger Nielsen created this Life Tributes page to make it easy to share your memories.

Roger B. Nielsen, 71, passed away in Mansfield, Texas on April...