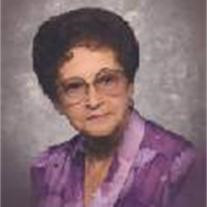 FORT WORTH -- Ruth Thompson passed away Wednesday, Oct. 17, 2007, at a local hospital. Graveside service: 10:30 a.m. Saturday in Moore Memorial Gardens. Visitation: The family will receive friends 5 to 8 p.m. Friday at Lucas Funeral Home, 517 N. Sylvania Ave. Ruth was born Jan. 6, 1909, in Royse City. In 1926, she graduated from Texas Woman's College with a teaching degree. While at TWC she was the captain of the basketball team at a height of only 5 feet 2 inches. Ruth taught grades one through 10 in a one-room schoolhouse. In 1930, Ruth moved to Riverside and was a longtime member of First Baptist Church of Fort Worth. She sang gospel music with family members in church and on the radio in the 1940s. During World War II she worked for Convair, later General Dynamics, wiring bomb bay doors. She also worked at the landmark Scott's Drug Store in Riverside. From 1955 to 1974, she helped open and worked as a receptionist for her daughter, Beverly, at Beverly Thompson's Studios of Dance. In 1985, she again was a receptionist for her daughter and granddaughter's studio, Tracidee and Beverly Dance Centre'. Ruth loved working around children and their families and missed seeing them after retiring at the age of 88. Ruth was preceded in death by her parents, Henry W. and Mollie Sims; sisters, Miskel Webb and Luis Parker; and brother, Loyd Sims. Survivors: Son, Murry Dwayne Thompson and wife, Sylvia; daughter, Beverly Thompson Maxcy and husband, Lonnie; grandchildren, Tracidee Green, Keith From and Ryan From; great-grandchildren, Lauren Green, Allie Green and Kodi From; and many beloved nieces, nephews, other relatives and friends.

The family of Ruby Thompson created this Life Tributes page to make it easy to share your memories.