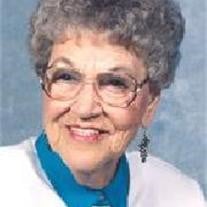 Memorials: In lieu of flowers, the family suggests contributions to the Alzheimer's Association, P.O. Box 9709, Fort Worth; or First Baptist Church of Euless. ??? Mrs. Granade was born April 18, 1910, in Allen. Her family moved to Fort Worth in 1925, where she grew up in a happy, loving home with her parents, two brothers and five sisters. She graduated from North Side High School in 1929. While attending North Side, she met the love of her life, P.D. Granade, and they were married Sept. 14, 1930. ??? She worked at Montgomery Ward on West 7th Street in Fort Worth from 1930-1942. She was a biller and typist and typed over 120 words per minute on up into her older years. From 1942-1943, she worked in the finance office for the 8th Air Force, working on government bonds. ??? From 1946-1949, she and her husband owned their own business, Granade Grocery and Market, at 1200 Riverside in Fort Worth. In 1949, she went to work for Chance Vought in Grand Prairie as a tooling clerk. From 1951-1954, she worked for Southern Air Procurement in Fort Worth as a clerk-typist, then in 1956, for the U.S. Army at Fort Worth General Depot. In 1965, she worked for Central Airlines at Greater Southwest Airport. Her last job, which took her well into her 80s, was as an office assistant for her son-in-law, Dr. W.H. Albritton, at his dental office in Hurst. She not only took care of her job responsibilities, but also lifted the spirits of all those around her. ??? Mrs. Granade loved the Lord and dedicated her life to serving Him and raising her children to he His faithful servants. Her faith in Jesus Christ allowed her to live a life by example, which influenced the lives of her children and theirs for many generations to come. She was a devoted mother to her two children. The unconditional love she shared with them had an indelible impact on their lives. She was also forever faithful to her siblings to the last day of her life. ??? Mrs. Granade was a fervent sports fan. She rarely missed a Mavericks, Cowboys or Rangers game. She also enjoyed bridge, dominoes and chicken foot but, most of all, loved being with her ??? family. She was a member of First Baptist Euless. ??? She was preceded in death by parents, Mr. and Mrs. B.D. Jones; husband, Powe Dawson Granade Sr.; sister, Alyne James and husband, Hubert; brothers, Eugene Jones and wife, Elizabeth and J.B. Jones and wife, Mary Anne; brothers-in-law, R.B. Riddle, Benny Evans, Bill Howell and Bob Craig. ??? Survivors: Daughter, Mary Lane Albritton and husband, Harold; son, Dawson Granade and wife, Cindi; grandchildren, Bill Albritton and wife, Karen, Rosemary Shaunfield and husband, Bruce, Brett Albritton and wife, Marla, Shannon Sedwick and husband, Todd, and Sean Stevens and wife, Kristin; 10 great-grandchildren; four great-great-grandchildren; sisters, Imogene Craig, Luise Riddle, Katie Evans and Rosemary Pirkle and husband, Rodney; and caregiver, Alice Gonzalez.

Memorials: In lieu of flowers, the family suggests contributions to the Alzheimer's Association, P.O. Box 9709, Fort Worth; or First Baptist Church of Euless. ??? Mrs. Granade was born April 18, 1910, in Allen. Her family moved to Fort Worth... View Obituary & Service Information

The family of Rueline Granade created this Life Tributes page to make it easy to share your memories.

Memorials: In lieu of flowers, the family suggests contributions...