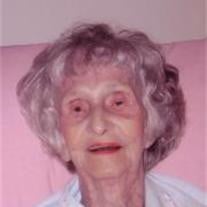 FORT WORTH -- Sallie B. Glenn Cook, 102, a loving mother, grandmother and great-grandmother, died peacefully Monday morning, June 18, 2007. Funeral: 10 a.m. Wednesday in the chapel of Robertson Mueller Harper. The Rev. Jerry O. Thomas will officiate. Burial: Sallie will be laid to rest next to her husband, William, in Mount Olivet Cemetery. Visitation: She will lie in state Tuesday afternoon in the Parlor at Robertson Mueller Harper; her family will receive friends 5 to 7 p.m. in the Great Room. Memorials: Consideration of contributions to a charity of one's choice, in memory of Sallie, is suggested. A native of Aquilla, a small West Texas town, Sallie B. was born July 27, 1904, the daughter of Sam Benning and Lillie Boyett Glenn. She was one of nine brothers and sisters. In 1910, Sallie's dad decided to move the family to Oklahoma and continued on to New Hope, Ark., and then Compton, Ark. They returned to Oklahoma before heading back to Texas. Little Sallie Glenn married William Lawrence Cook on Jan. 24, 1925. The couple was blessed with four children, three grandchildren and five great-grandchildren. At age 68, she took up painting and discovered a talent that had been latent and unused. Mrs. Cook had kept a diary and notes of her memories. In 2000, her book was published and it is great reading. She was a longtime member of Rosen Heights Baptist Church. In addition to her husband, parents and siblings, Sallie was preceded in death by a daughter, Charline Beal; a granddaughter, Lou Ann Beal Hartline; and her son-in-law, Luther Callaway. Her family wishes to express heartfelt thanks for the many kindnesses and care Sallie received from the associates at Stonegate Nursing Center. Survivors: Daughters, Aline Cook Callaway and Glenna Cook Marsh and her husband, Dale; son, William Lawrence "Mitt" Cook Jr. and his wife, Sherry; grandchildren, William L. Cook III and his wife, Lise, and George Beal Jr.; five great-grandchildren; sister, Josie V. Glenn Smith; and caregiver and friend, Barbara Stewart.Robertson Mueller Harper Funerals & Cremations 1500 Eighth Ave., 817-924-4233

The family of SALLIE COOK created this Life Tributes page to make it easy to share your memories.