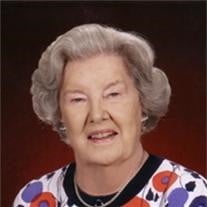 FORT WORTH -- Sarah Lillian Dewees Johnson, 82, passed away peacefully Tuesday afternoon, Sept. 15, 2009, at home.        Service: 3 p.m. Friday in Greenwood Memorial Park with longtime family friend the Rev. Bertrand N. Honea Jr. officiating. Sarah will be laid to rest with husband, Jim, who died in 1985. Following the service, family and friends will be received at her home.        Memorials: Consideration of contributions to a charity of one's choice is suggested.        Sarah was born Feb. 11, 1927, the daughter of Charles Bell and Cheba Theone Creel Dewees. She graduated from Arlington Heights High School before attending Sullins College in Bristol, Va., prior to her marriage to Joseph James "Jim" Johnson Jr. in 1946.        She was a member of the Fort Worth Garden Club, Fort Worth Lecture Foundation and the Rejebian Book Club, the Woman's Club of Fort Worth, including its Clob Bon Soir, Sorosis Club and Polaris Club. Her memberships also included the Petroleum Club of Fort Worth.        Sarah was a past board member of the Mount Zion Cemetery Association of Rockwall and the Fort Worth Girls Club. She had also been a volunteer at Harris Methodist Hospital and Cook Children's Medical Center. She was a lifelong member of Arlington Heights United Methodist Church, where she participated in various study groups.        She was preceded in death by her parents; husband; son, Joseph James "Jay" Johnson III; and brother, Charles Bell Dewees Jr.        Survivors: In addition to her daughter, Sarah Johnson Williams, and her husband, Wes, of Fort Worth and Rhome, Sarah is survived by her daughter-in-law, Sharon Johnson Zimmermann of Pennsylvania; grandchildren, Erika Johnson Conklin and her husband, Michael, of South Carolina and Colin Joseph Johnson and Kaitlin Sarah Johnson, both of Pennsylvania; great-grandchildren, Mason and Gavin Conklin of South Carolina; brother-in-law, William Dodson Johnson of Austin; niece, Karen Dewees Reynolds of Fort Worth; and nephew, Charles B. Dewees III of Austin. Robertson Mueller Harper Funerals & Cremations 1500 Eighth Ave., 817-924-4233

The family of SARAH JOHNSON created this Life Tributes page to make it easy to share your memories.