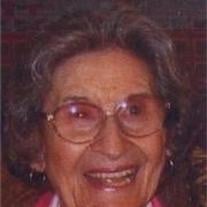 DALLAS -- Sylvia Rosenberg Hoffman, 89, a loving wife, mother, grandmother and great-grandmother, died peacefully Monday morning, June 25, 2007. Funeral: 10:30 a.m. Tuesday in Ahavath Sholom Cemetery. Rabbi Sidney Zimelman, retired, and Dr. Javier Smolarz, ritual director of the synagogue, will officiate. Burial: Following committal prayers, Sylvia will be laid to rest next to her husband, Raphael, in the cemetery. Memorials: Consideration of contributions, in lieu of flowers, to a charity of one's choice, in memory of Sylvia, is suggested. A native of Brooklyn, N.Y., Sylvia was born Aug. 25, 1917, the daughter of Jack and Anna Osorowitz Rosenberg. She was married to Raphael Frank Hoffman. Sylvia and the family moved to Fort Worth in 1962 from Washington, D.C., where Mr. Hoffman was a computer analyst with the federal government. She was a member of Congregation Ahavath Sholom and Hadassah. Devoted to her family, she enjoyed reading. Following the death of her husband in 1992, Sylvia moved to Dallas to be closer to her family. Survivors: Daughter, Arlene Hoffman Lamark and her husband, Lewis, of Dallas; son, Gerald Hoffman and his wife, Julie, of McKinney; grandchildren, Shelley Lamark Becker and her husband, Jeff, of Dallas, and Jodi Lamark Hughes and her husband, Donnie, of Round Rock; great-grandchildren, Ryan and Alec Becker and Connor Hughes; brother, Seymour Rosenberg and his wife, Eleanor, of Forest Hills, N.Y.; niece, Bonnie Rosenberg Berman and her husband, Steven; and nephew, Howard Rosenberg and his wife, Lisa.Robertson Mueller Harper Funerals & Cremations 1500 Eighth Ave., 817-924-4233

The family of SYLVIA HOFFMAN created this Life Tributes page to make it easy to share your memories.