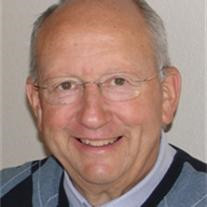 Steven Jay Foster, 61, of Mansfield, TX died unexpectedly on Monday (November 15, 2010) at Methodist Mansfield Hospital. Steve was born on November 22, 1948 in Mason City, IA, the son of Marvin and Mildred Foster, Garner, IA. He met his future wife, Nancy Gabelmann, during his Junior year of high school. During high school, he enjoyed playing football and golf. He graduated from Garner-Hayfield High School in May, 1967. In September 1967, Steve enlisted in the United States Air Force, stationed in Texas, Colorado and the Philippines as a Communications Specialist. He was honorably discharged in May 1971 and had a lifetime of passion towards the Air Force and service to his country. On December 21, 1968, Steve and Nancy married at Faith Lutheran Church in Miller, IA. He graduated from Iowa State University in 1978 with a degree in Business Administration, starting a lifelong career in Insurance with his first company, All-State. He worked for a variety of insurance companies throughout his career but was most proud of the past 20 years spent with Wells Fargo Insurance. Steve was, above all, an extremely loving and caring husband and father to his four children. In the past five years, he was most happy spending time with his 8 grandchildren. He also enjoyed golfing, woodworking and playing games on the computer in his spare time. Steve was devoted to his family, and his faith and love of God carried him through life. Steve is survived by his wife, Nancy; four children, Stephanie Shkolnikov and her husband, Leo, of McKinney, TX, William Foster and his wife, Jill, of Omaha, NE, Sarah Kostis and her husband, Michail, of Arlington, TX and Molly Nelsen and her husband, Dan, of Warrensburg, MO; two sisters, Gloria Eccles of Tuscan, AZ and Glenda Brady of Ankeny, IA, and one brother, Richard Foster and his wife, Helen, of Grundy Center, IA; and grandchildren Maximilian and Yves Shkolnikov, Nathaniel Foster, Alexander and Dylan Kostis, and Kristian, Oliver and Sophia Nelsen. Steve was preceded in death by his parents and brother-in-law Dan Brady.

The family of Steven Foster created this Life Tributes page to make it easy to share your memories.