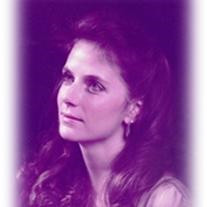 DALLAS -- Toni Lynn Brown Gernsbacher, a loving and nurturing mother to her two beloved daughters, Leigh and Jordan, and devoted wife to her husband, Harold, passed away in her home early Tuesday morning, July 9, 2013, late in her 53rd year. Service: 1 p.m. Wednesday in the Barnett Sanctuary at Congregation Ahavath Sholom, 4050 S. Hulen Street, with Rabbi Andrew Bloom, host, and Rabbi Rafi Cohen, Congregation Beth Torah, Richardson, officiating. Following committal prayers, she will be laid to rest on the Gernsbacher Family Plot in the Beth-El Section of Greenwood Memorial Park. Family and friends will gather at the Gernsbacher residence in Dallas after the committal service in the cemetery, with minyan beginning at 6 p.m. Memorials: Her family respectfully requests that no flowers be sent. However, consideration of contributions to the Juvenile Diabetes Research Foundation of Dallas, JDRF, or the Neuro Endocrine Program at Ochsner Medical Center-Kenner, La., in her memory, is suggested. Born July 15, 1959, in Fort Worth, Toni was the daughter of Alta Mae and David Brown. She graduated from Arlington Heights High School and attended the University of Texas at Austin. Toni had an unwavering commitment to her choice of being Jewish; learning to read Hebrew and studying for her Bat Mitzvah and prioritizing much of her time, energy and resources in support of Jewish causes and the State of Israel. She married Harold Gernsbacher Jr. in 1985, subsequently making their home in Fort Worth, where Harold was a fourth-generation member of the Fort Worth community. Later in life, they moved to Dallas in support of furthering their youngest daughter's Jewish education. A beloved member of the community, in both Fort Worth and Dallas, Toni was passionate about her beliefs, often taking on local and national causes. She spent much her time on her family, supporting charitable causes and working with her NETs cancer group. Toni was a very courageous person whose spirit was strong and unwavering. Her love and devotion to her family was uncompromising, focusing on their general and Jewish Education, her dedication and commitment to a sound, loving, and caring environment was a principal guidance in her life. She had a great affection for spending time with her extended family and friends as well as a very fond love of travel. Survivors: In addition to her husband and daughters, Toni is survived by her sister and brother-in-law, D'ann and David Woodle of Fort Worth, and their children, Shannon and Jonathan Scala and Matthew Shipley; extended family, Arthur "Paw Paw" Stroeck of Fort Worth and Diane and Phil Hughes of Plano and their children, Jamie Jaubert and Julie Graham; aunts and uncles, Rose and Robert Foster, Caroline and Coy Foster, Marsha and Neil Haney and their families; and Maggie Belle "MeMaw" Haney; sisters-in-law and husbands, Sandy and Mike O'Connor of Houston and their children, Stephanie and Ryan Harrington and Laura O'Connor and Lesley O'Connor, Karen and Robert Becker of Bloomington, Ind., and their son, Adam; aunts, Helen Stern and her children, Ronald Stern and Elisse Walter and Richard Stern, Cindy and Nicole Stern; Ruth Stern and her son, Allen; cousins, Pete and Gail Loeb; caregiver and loving friend, Delia Hernandez; along with a wealth of wonderful friends that were her extended family. Robertson Mueller Harper Funerals & Cremations 1500 Eighth Ave., 817-924-4233

DALLAS -- Toni Lynn Brown Gernsbacher, a loving and nurturing mother to her two beloved daughters, Leigh and Jordan, and devoted wife to her husband, Harold, passed away in her home early Tuesday morning, July 9, 2013, late in her 53rd year.... View Obituary & Service Information

The family of TONI GERNSBACHER created this Life Tributes page to make it easy to share your memories.