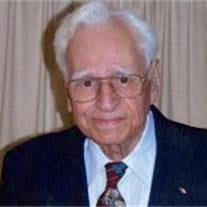 MEMORIALS: Alzheimer's Fund in loving memory of lrene and Ed Bachner, 7132 Dover Lane, Forth Worth, Texas, 76118. CELEBRATION OF LIFE: Born 5/28/16, in Youngstown, OH, Ed Bachner was a retired American Airlines Captain, and Grey Eagle #399. He was preceded in death 7/25/2004 by his loving wife of 65 years, Irene. He had a rich and full life during which he was able to live independently, caring for home, dogs and yards. He safely maintained an active drivers license and a concealed carry permit. His FAA Certified Flight Instructor, Single-Engine, Multi-Engine & Instrument ratings were kept current from 1940 until the time of his death. During his final, two month decline in health, he was continuously attended by a loving family member. Ed was a Life Member of the NRA, the Amateur Trap Shooting Assoc., the Grey Eagles, the OX5 Club, and the Over the Hill Gang. He participated in RACES the Radio Amateur Civil Emergency Services where he employed his HAM radio license, K5BDF. He had been a Haltom City Mason for fifty years and belonged to the Quarter Century Wireless Assoc. and the Moslem Shrine Temple. Captain Bachner was very proud of his long, dependable history as an American Airlines pilot. He soloed his first biplane in 1939 after very little instruction, and then instructed himself to become instrument, multi-engine and instructor rated by 1942, when he started flying for American Airlines. He flew the DC-3, 4,6,7 & retired on the DC-10. He also flew the Convair 240,340 & 440, Lockheed Electra, and Boeing 707, 720, & 727. He taught army primary and naval instrument flying during World II, flew the Berlin Airlift in 1948 & 49 and the Military Air Contract to Viet Nam. He was a serious, careful pilot who safely handled several dangerous in-flight emergencies and near mid-air collisions. After one such event, when a reporter asked how he handled the heavy responsibility of all those sitting behind him, he said he never really thought of them - he just figured if he concentrated on taking care of himself, then they'd be all right too! After retiring as a pilot at the maximum age of 60, he spent several years serving as a DC-10 instructor at the AA Flight Academy. A highlight of his life was when he soloed his 16-year old son, Martin, who is now a Northwest Airlines Captain. Captain Bachner also had a long history of community service. He served as a Birdville School Board Trustee, and was the first Fire Marshall for both Haltom City and Richland Hills. He was on the Haltom City Council, a Haltom City Mayor Pro Tem & Municipal Judge, and Asst. Chief of the Haltom City Fire Department. He served several times as Richland Hills Interim City Manager and the Chairman of the Richland Hills Zoning Board of Adjustments. He participated continuously in the Fort Worth Star Telegram phone-in rain reports, and the monthly RACES emergency siren check, Siren #1. During his full life, Ed's hobbies included wood carving, shooting, boating, fishing and HAM Radio. More recently, he enjoyed digital photography, personal computing and the internet. Capt. Bachner is lovingly remembered by his two sons Thomas E. (Ed) Bachner, Jr., and Capt. Martin Bachner, their wives Mary Ellen and Kim Bachner, Ed Jr.'s two son's Charles Stuart Bachner and Thomas E (Trey) Bachner III and Trey's wife Anne. He is also survived by his daughter Jane Barnard, her daughter Kathleen Barnard Ross and son Bill Barnard, and Bill's wife Julie. He has four greatgrandchildren, Destiny Ross (6), Nathan Mather Bachner (7), Daniel Thomas Bachner (5), Lauren Reynolds Bachner (3). He also has two step-grandchildren, Benjamin Rodenkirch and Jessica Rodenkirch Fuller, and two step great-grandchildren, Colin Michael Fuller (3) and Holden Benjamin Fuller (8 months). He will be sorely missed, as is his beloved wife, Irene.

The family of Thomas Bachner created this Life Tributes page to make it easy to share your memories.

MEMORIALS: Alzheimer&#39;s Fund in loving memory of lrene and Ed...