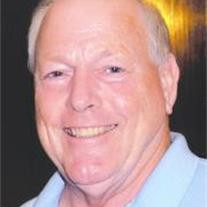 HALTOM CITY -- We mourn the loss of Thomas G. Sanders who died Wednesday, Oct. 24, 2007, surrounded by his wife and three sons, after 63 years and 6 days on this earth. Funeral: 9 a.m. Saturday at Richland Hills Baptist Church, 6852 Baker Blvd., Richland Hills. Burial: Following the funeral in Bluebonnet Hills Memorial Park, Colleyville. Visitation: 6 to 8 p.m. Friday at Lucas Funeral Home, 1321 Precinct Line Rd., Hurst. Memorials: In lieu of flowers, donations may be made to the Thomas G. Sanders Memorial Trust, 6121 Glenview Dr., Fort Worth, Texas 76180. A native of Fort Worth, Tom was born Oct. 18, 1944. He touched many lives during his albeit too short a time with us. He was husband, father, grandfather, brother, uncle, coach, chef, philanthropist, friend to many and loved by all. Though his life was too short, he accomplished much. He graduated from Haltom High School in 1962 and served in the United States Navy as a communications technician. He spent his career as an air traffic controller. Survivors: Wife, Margaret; his son, Tom and wife, Kelly, and their children, Amanda and Thomas III; son, JD and wife, Emily, and their children, Aidan and Riley; son, Mark and wife, Anada, and their daughter, Sofia; his mother, Elizabeth Sanders; and his sister, Mary Kern.

The family of Thomas Sanders created this Life Tributes page to make it easy to share your memories.

HALTOM CITY -- We mourn the loss of Thomas G. Sanders who died...