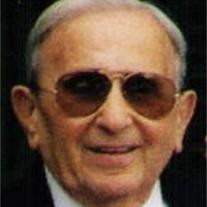 FORT WORTH -- Valentine Val Pikkel a loving husband, father, grandfather of 2 and great-grandfather of 4, died peacefully at his home early Tuesday morning, Sept. 18, 2007. Funeral: 4 p.m. Thursday, Sept. 20, in the sanctuary of Beth-El Congregation, 4900 Briarhaven Road. Rabbis Ralph Mecklenburger, Beth-El Congregation, Yitzhak Cohen, Congregation Nishmat Am, and Alberto (Baruch) Zeilicovich, Congregation Ahavath Sholom, will officiate. Val will be laid to rest next to his wife, Blanche in Ahavath Sholom Cemetery 411 N. University Dr. Bearers of his casket will be Marvin Beleck, Izzy Blumberg, Earl Givant, Anatoly Ioffe, Dr. Boris Ioffe and Hal Radetsky. Honorary Bearers will be Joe Bayer, Wayne Brink, Dr. Roger Eppstein, Bryan McConnell, Dr. Manucher Nazarian and Dr. Michael Nazarian. Minyan Services will be held at the residence of Mr. Pikkel's daughter, following committal services in the cemetery. Memorials: Consideration of contributions to Community Hospice of Fort Worth, 6100 Western Place, Ste. #500, Fort Worth, Texas 76107; the Library Fund at Beth-El Congregation, 4900 Briarhaven Road, Fort Worth, Texas 76109; the Youth Camp Scholarship Fund at Congregation Nishmat Am, 2113 W. Spring Creek Parkway, Plano, Texas 75023; the Religious School Fund at Congregation Ahavath Sholom, 4050 S. Hulen Street, Fort Worth, TexasX 76109; the Bewley Hall Renovation Fund at The Womans Club of Fort Worth, 1316 Pennsylvania Avenue, Fort Worth, Texas 76104; or to a charity of one's choice, in memory of Val, is suggested. Val was born in Chust, Czechoslovakia May 10, 1921. At the age of 14 he started his technical training in Bratislava, the capital of Slovakia. While in Bratislava he became an active member of SHOMER HATZAIR , a Zionist youth group. Born to orthodox parents, he continued his Jewish studies and was considered by many to be a Jewish scholar. Val was an avid reader and a knowledgeable historian. He recently told Rabbi Yitzhak Cohen of Congregation Nishmat Am in Plano that his only regret in life is that after retirement he did not take the time to further his Jewish studies and become a Rabbi. He served as a navigator in the Czech military during WWII. At the end of war he returned to his home town to look for his childhood sweetheart, Blanche. They met when she was three and he was five; they were separated by the war. In one of the great love stories in the immense tragedy of the Holocaust, Blanche survived Auschwitz and returned home to Chust. Val was told by friends in Budapest, Hungary that Blanche survived the war and was at home, he immediately set out to find her. They married in July of 1945 and moved to Bohemia where Val continued his education in structural engineering. He went to school by day and in the evenings helped build what ultimately became some of the equipment used by Israels Air Force in the war for independence. He immigrated to Israel in November of 1948, served in the Israeli Air Force in the war for independence and in the Sinai Campaign of 1956. Val immigrated to New York with his family in July of 1962. He took a job as a structural engineer. He helped develop and build large structures and projects such as CO-OP city in the Bronx. Val and Blanche lived in Flushing until 1978 when they moved to Fort Worth to be closer to their only daughter. Val was proud to be an American, and Thanksgiving was his favorite holiday. He was fluent in eight languages and never knew a stranger. He was completely dedicated to his family especially his grand children. If you asked this very accomplished man what is greatest achievements in life were he would list among them teaching his grandsons how to ride a bike. He was a member of Congregation Ahavath Shalom in Fort Worth and a founding member of Congregation Nishmat Am in Plano Texas. Val was preceded in death by his wife, Blanche, who died in 2005. Survivors: his daughter, Rachel Goldman and her husband, Mike of Fort Worth; grandsons, Elliot S. Goldman his wife Heather and their children, Grace Goldman and Grant Goldman of Fort Worth, and Jeremy S. Goldman his wife, Valanie and their sons, Winston Wolf Goldman and Wyatt Reed Goldman of Las Colinas. Robertson Mueller Harper Funerals & Cremations 1500 Eighth Ave., 817-924-4233

The family of VALENTINE PIKKEL created this Life Tributes page to make it easy to share your memories.