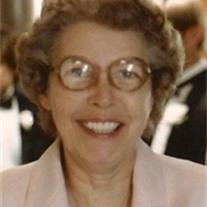 HURST -- Violet Elaine Pearson Harvey, 82, a former longtime resident of Norman, Okla., passed away Tuesday, June 15, 2010, in Hurst.        Funeral: 2 p.m. Saturday, Lucas Funeral Chapel in Hurst. She will be laid to rest with her husband, Blair, in Dallas-Fort Worth National Cemetery. Visitation: 1 to 2 p.m. Saturday at the funeral home.        She was born Feb. 18, 1928, in Galesburg, Ill., to the late August and Hilma Pearson. Vye graduated from Galesburg High and worked in her father's industry and in retail fashions before her marriage.        Vye was happily married to Walter Blair Harvey, who died in 2001, for 50 years and she especially enjoyed their post-retirement travels to various locales aboard cruise ships. She also loved playing bridge with her friends many years ago.        Greatly saddened by the loss of Blair, Vye showed great strength and courage to pursue an independent life in her later years despite her physical ailments. She was also known to her family and friends as the great lover of all cats, especially her infamous red tabby, Marmalade. Vye was also spunky and wanted everyone to stand up for themselves and she always showed a wonderful sense of fashion.        Vye was predeceased by her aforementioned husband and parents; her brother, Fred Pearson; her sister, Virginia Weider (Leigh), both of Portage, Wis.; nephew, Mike Pearson of Milwaukee, Wis.; and her beloved grandson, Justin Harvey of Austin.        Survivors: Those who survive to cherish Vye's memory are her beloved sons, Craig Harvey (Peggy) of Houston, Chris Harvey (Julie) of Tulsa, Okla.; beloved grandchildren, Derek Harvey of Houston, Sam and Jacob Harvey of Tulsa, Okla., Hannah Jenkins (Anthony) of Hollywood, Calif.; Vye's beloved nieces, Sally Weider Green (John) of Portage, Wis., Nicki Schultz (Leroy) of Chetek, Wis., Pam Curschmann (John) of Lake Delton, Wis.; neighbors in Hurst, especially Paul McCambridge; and last but most especially, her longtime best friend, Pat Myers (Larry) of Fort Worth.

The family of Violet Harvey created this Life Tributes page to make it easy to share your memories.