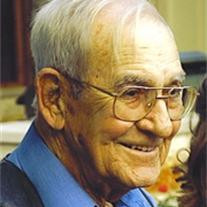 CLEBURNE -- Virgil "Pete" Moore, 92, passed away Thursday, Jan. 10, 2008, just three weeks before his 93rd birthday, at his home surrounded by the love of his family. Funeral: 11 a.m. Monday at Calvary Baptist Church, 700 Woodard Ave., Cleburne, with the pastor, Rev. Charles Payne, officiating. Burial: 3 p.m. Monday in Mount Olivet Cemetery, Fort Worth. Visitation: The family will receive friends 2 to 4 p.m. Sunday at Lucas Funeral Home, 1321 Precinct Line Road, Hurst. Pete was born Feb. 3, 1915, in Davidson, Okla., to Young Howard and Lou Ann January Moore. He was a member of the Cleburne Elks Lodge #811 and served in various leadership positions, including his current post of sweetheart. He was a sweetheart from his fun-loving nature to the twinkle in his eye. He never met a stranger and was generous to a fault. He was very proud of the work of the lodge in helping disadvantaged children and the VA hospital in Waco. His family, friends and neighbors will miss his homegrown tomatoes this summer. Pete served in the U.S. Navy during World War II. He was on his way to Hawaii when Pearl Harbor was attacked. Pete was an entrepreneur. After working two jobs most of his life, he started a mowing business when he was in his 70s. He had contracts with the city and county to do their mowing as well as many private business and homes. He leaves behind a legacy of giving, sharing and fun that will be missed. "Keep dancing in heaven, Paw Paw, we will miss you.""My Paw Paw's secret to longevity must have been staying active and being a continuous aggravator." Pete Moore was a good man. He was preceded in death by his wife, Cleo; son, Virgil "Bo" Moore; grandson, Kelley Ramey; his second wife, Claudia; three sisters, Winobeth Moore, Lilly Anderson and Jimmie Nolan; and two brothers, Howard Moore Jr. and Harley Moore. Survivors: Daughter, Ruby Ramey of Humble; son, Joe Paul Moore and his wife, Jeri, of Hurst; daughter, Sammye McGlaun and her husband, Kenneth, of Athens; daughter, Joyce Pugh and husband, Buddy, of Mansfield; brother, Spec Moore; sisters, Juanita Tucker and Florene Deloney; special friend, Betty Armstrong; 11 grandchildren; 16 great-grandchildren; one great-great-grandchild; and numerous nieces and nephews.

The family of Virgil Moore created this Life Tributes page to make it easy to share your memories.