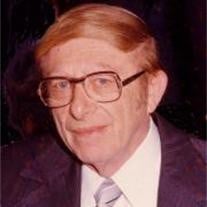 FORT WORTH -- Walter George Wender, 88, a native of Vienna, Austria, died peacefully Tuesday evening, Nov. 28, 2006. Funeral: Following committal prayers at 11:30 a.m. Friday in the Beth-El Section of Greenwood Memorial Park, Walter will be laid to rest next to his wife, Freda. Dr. Samuel M. Stahl, rabbi emeritus of Temple Beth-El, San Antonio, will officiate. Visitation: Mr. Wender will not lie in state. His family will receive friends Friday in the Great Hall at Beth-El Congregation, 4901 Briarhaven Road, beginning at 12:30 p.m. Bearers of his casket will be his grandsons, Jeffry Wender, Loren Wender, David Wender and Joshua Wender; his grandson-in-law, Bruce Frankel; and his nephew, Robert M. Herman. Memorials: In lieu of usual remembrances, contributions in memory of Walter to Beth-El Congregation, the American Heart Association, Harris Methodist Fort Worth or a charity of choice are suggested. Born on May 30, 1918, Walter George Wender was a man of strength and courage who escaped the Holocaust and taught himself English. He was helped to immigrate to the United States by a complete stranger, Irving Wender. The two remained friends for over 68 years. Walter volunteered for the U.S. Army and was stationed at Fort Sam Houston in San Antonio. There he met Freda Tobolowsky of blessed memory. The couple were married for 51 years before Mrs. Wender's death in 1993. He was a member of Beth-El Congregation, a Mason and a devoted volunteer at Harris Methodist for over 20 years. Walter also did volunteer work at James L. West Special Care Center. His family wishes to thank Dr. Martin Toby, Dr. Kendra Belfi and Walter's many friends who enriched his life. Survivors: Sons, Charles Martin "Marty" Wender and his wife, Rene, of San Antonio and Dr. Jerry L. Wender and his wife, Faye, of Houston; grandchildren, Jeffry Wender and his wife, Jody, of Dallas, Loren Wender of Dallas, David Wender and his wife, Jaime, of Atlanta, Ga., Molly Ann Frankel and her husband, Bruce, of Houston and Aliza Wender and Joshua Wender, both of Austin; nephew, Robert M. Herman and his wife, Julie, of Dallas; and his loving friend and partner for the past 11 years, Anne Lanford. Robertson Mueller Harper Funerals & Cremations 1500 Eighth Ave., 817-924-4233

The family of WALTER WENDER created this Life Tributes page to make it easy to share your memories.