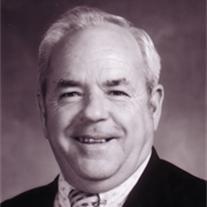 FORT WORTH -- William Harvey Gates, 81, F-194, beloved husband, father, grandfather and great-grandfather, died peacefully Wednesday afternoon, July 9, 2008. Funeral: 11 a.m. Monday in the chapel at Robertson Mueller Harper. Chaplain Ed Stauffer, Fort Worth Fire Department, will officiate. Bill will be laid to rest in Pioneer Rest Cemetery. Bearers of his casket will be his sons, Mike and John and Bob Barber, J. T. Doyle, Lance Usrey and J. J. Whiteside. Visitation: He will lie in state Sunday afternoon in the Parlor at Robertson Mueller Harper; his family will receive friends 2 to 3 p.m. in the Great Room. Memorials: Consideration of contributions to a charity of one's choice, in Bill's memory, is suggested. A lifelong resident of Fort Worth, William Harvey Gates was born Sept. 30, 1926, the son of G.S. and Myra Davis Gates. At a young age, Bill, Gator or Gatorbug as he was known to family, associates and friends, left school to work and help out his family. He joined the Fort Worth Fire Department in 1952 and retired in 1985 after becoming a lieutenant. Over the years, he worked as a fire marshal in arson investigations and as a bomb squad technician. Bill was an avid representative of the Firefighters Association, often leading the way in civic affairs. Survivors: Bill is survived by his wife of 61 years, Evelyn; sons, Michael Gates and John Gates and his wife, JoAnn, all of Fort Worth; grandchildren, Sherry Aiken and Sheila McCarty; and great-grandchildren, Ashley Walston and Jamie McCarty. Robertson Mueller Harper Funerals & Cremations 1500 Eighth Ave., 817-924-4233

The family of WILLIAM GATES created this Life Tributes page to make it easy to share your memories.