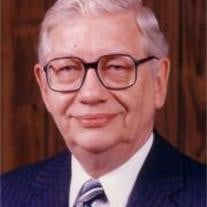 FORT WORTH -- William Henderson Michero, 81, retired chairman of the board of Tandycrafts, Inc., died suddenly Friday evening, Dec. 22, 2006. Funeral: 11 a.m. Tuesday in the chapel at Robertson Mueller Harper. The Rev. Lawrence M. Hammond will officiate. Burial: Following private committal services for the family, Bill will be laid to rest in the Mausoleum at Greenwood Memorial Park. Visitation: His family will receive friends immediately following the chapel service. Memorials: Consideration of contributions to a charity of choice in memory of Bill is suggested. A native and life resident of Fort Worth, William Henderson Michero was born June 19, 1925, the son of William Alvin and Lela Belle Henderson Michero. Upon graduation from R.L. Paschal High School, he enrolled at Texas Christian University at the age of 16 with a partial scholarship. In 1943 Bill entered the U.S. Navy, was discharged in 1946 and resumed his studies at TCU. He joined Hinckley-Tandy Leather Company in 1948 while earning a bachelor's degree in commerce. In 1950, Bill was among 17 employee-investors, under the leadership of Dave and Charles Tandy who separated the Tandy Leather Company from its previous partnership. He held a succession of posts in the Tandy organization, including credit, personnel, advertising and division management. From 1952 through 1954, Michero was in charge of the companys first eastern retail store expansion headquartering in New York. In 1959 he was named assistant secretary of Tandy Corporation responsible for the financial community, stockholder and regulatory matters in New York and Boston. In 1960 Bill was elected corporate secretary when the headquarters was moved to Fort Worth and he was active in the acquisition and financing programs of that decade. In 1970 he was elected a vice president. With the spinoff by Tandy Corporation in 1975, Mr. Michero joined Tandycrafts, Inc. as vice president, secretary and treasurer. The company was listed on the New York Stock Exchange that year. In 1979 he was named a director and in 1983 he was elected chairman of the board, retiring from that position in 1990. Mr. Michero was very involved in community activities and served as officer and director of many organizations, including B.F. Johnson Foundation, David L. Tandy Foundation, Distributive Education Council, Fort Worth Museum of Science and History, Oakwood Cemetery Association, United Way of Tarrant County, Panther Boys Club. His memberships included Historic Preservation of Tarrant County, the Fort Worth Zoo and Fort Worth museums. A generous donor to his alma mater, TCU, he was Valuable Alumnus of 1969, chairman of TCU Fort Worth Week and Alumni Association president. His memberships also included the Fort Worth Club and Colonial Country Club. Survivors: Wife, Elaine Henderson Michero of Fort Worth; daughter, Janie Michero Christie and her husband, Steve of Fort Worth; sons, Bill Michero and his wife, Jenny, also of Fort Worth and Tom Michero of Austin; grandchildren, Katie Christie and her fiance', Stephen Nethery of Denver, Colo., Angie Christie Bulaich and her husband, Nick of Fort Worth, Jeff Michero and his wife, Emily of Fort Worth and Chris Michero of Dallas. Robertson Mueller Harper Funerals & Cremations 1500 Eighth Ave., 817-924-4233

The family of WILLIAM MICHERO created this Life Tributes page to make it easy to share your memories.