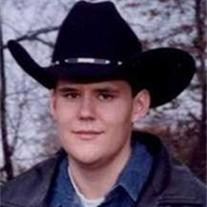 MANSFIELD -- Warren Michael Williams, 23, died from injuries sustained in an automobile accident Friday, May 23, 2008. Memorials: In lieu of flowers, the family requests donations in Warren's name to the Women's Division of the Mansfield Area Chamber of Commerce Foundation, Box 972, Mansfield, Texas 76063, for the purpose of general community beautification. Warren was born Jan. 31, 1985. He was baptized into the United Methodist Church by his good friend, Dr. Peter Agnew. Warren was a 2003 graduate of The Gateway School in Arlington. He was a four-year letterman on the basketball team. His favorite role on the team was to set screens. He attended Tarrant County College and was employed as a lawn and maintenance worker at Universal AdCom in Arlington. Warren's greatest pleasure was to help others. He helped people fix their cars, he repaired their fences and he was a strong shoulder to lean on for those who were less fortunate. Warren loved Mansfield. He worked tirelessly to improve our community. He participated in several Community Beautification Days, and he would do whatever needed to be done. Warren loved music. His tastes were eclectic, but his special favorites were Miles Davis and Frank Sinatra. Many people knew and loved Warren. We will miss him to the bottom of our hearts. Warren was preceded in death by his great-grandmother, Cora Cherry; great-grandparents, V.O. and Hazel Adkins; and grandparents, Robert and Hester Williams. Survivors: Parents, Richard and Joyce Williams; sister, Reba Williams; uncle and aunt, Rhys and Leigh Williams; uncle and aunt, Darren and Elizabeth Easley; great-grandfather, O.M. Cherry; grandparents, Doug and Martha Cherry; and numerous other family members. Warren is also survived by his special friend, Angela Little.

MANSFIELD -- Warren Michael Williams, 23, died from injuries sustained in an automobile accident Friday, May 23, 2008. Memorials: In lieu of flowers, the family requests donations in Warren's name to the Women's Division of the Mansfield Area... View Obituary & Service Information

The family of Warren Williams created this Life Tributes page to make it easy to share your memories.