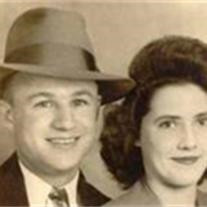 LILLIAN -- Waufield "Capa" Brown passed away Thursday, Feb. 14, 2008. Funeral: 2 p.m. Monday at First Baptist Church, Lillian. Interment: Pleasant Point Cemetery, Lillian. Visitation: 2 to 4 p.m. Sunday at Blessing Funeral Home, Mansfield. On Thursday, Feb. 14, 2008, Waufield Brown got the Valentine's Day that he had been wishing for. Four years earlier he had to say goodbye to the love of his life, LaVerne. They had been inseparable since they married Aug. 22, 1942. With the exception of World War II, parting them for three years, they were never apart. Capa was born Jan. 10, 1920, in Lillian, the fourth child of six children born to A.L. and Kate Brown. They were farmers during the Depression and Capa always talked of hoeing and chopping cotton with his brothers and sisters. At the age of 17, Capa went to work for the Civilian Conservation Corps. At a Lillian bonfire he met the love of his life. He was deeply in love with LaVern Bradley from the moment they met and they married when he was 22 and she was 18. Little did he know that in October, Uncle Sam would need his services in Europe during World War II. He participated in many battles in the three years he served in the United States Army. In August 1943 he became the father of Larry Waufield Brown. He served in London, Brussels, Paris and Berlin. On D-Day he was one of thousands who stormed the beaches of Normandy. He served under Gen. George S. Patton. During the entire time of his service, he would be the first to tell you that all the time he was there, God was marching, riding, flying, and sleeping with him. He carried a small Bible in his flak jacket and never once was he injured or scratched. He called it a miracle, we know it was. After serving, "Capa" got to come home. On July 30, 1946, he welcomed another son, Billy Don Brown. Waufield Brown worked as a nurse at Public Health Hospital until he retired. He also worked part time at the Lillian Cotton Gin, Southwestern Expositon and Stock Show and, finally, Casstevens Cash and Carry. Waufield was a worker and tried to help all those he could along with his darling LaVerne. If there ever was a favorite thing to do it was taking vacations with family, mostly to Colorado, New Mexico and Arizona. They loved gardening and sitting on the porch. But now they are together just as he prayed the last four years. He was met with the heavenly host by his Lord and Savior Jesus Christ; his sweetheart; his daddy and mama; brothers, Andy, Harold; sister, Clara; many other friends and family; and his great-granddaughter, Tabitha. Survivors: "Capa" is survived by his sons, Larry and Bill; daughter-in-law, Fran, granddaughter, Cindy Easley and husband, Steve, of Lillian; grandsons, Bubba Brown of Hurst, Robert and Bobby Don Brown of Lillian and Justin Brown and wife, Rachel, of Mansfield; great-grandchildren, Jennifer Brown and husband, Delmonte, of Mansfield, Brittany Easley of Austin, Stephanie Easley of Corpus Christi, Matthew Brown of Hurst and Gage Brown of Mansfield; great-great-grandson, Dylan Burk of Mansfield; brother, Toots Brown of Burleson; sister, Katie Shaw and husband, Gene, of Godley; and sisters-in-law, Hattye Brown and Irene Brown.

The family of Waufield Brown created this Life Tributes page to make it easy to share your memories.