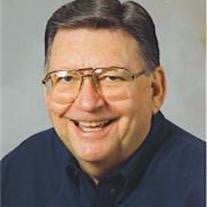 NORTH RICHLAND HILLS -- Wayne Dean Wilks Sr., 74, a beloved husband, father, grandfather and friend, went peacefully home to be with his Lord on Sunday, Dec. 16, 2007, in Fort Worth. He was a retired administrator at Tarrant County Junior College. Funeral: 10:30 a.m. Wednesday at Gateway Church, 2121 E. Southlake Blvd., Southlake. Graveside service: 4 p.m. Wednesday in Bartlett Cemetery in Bartlett. Visitation: 5 to 7 p.m. Tuesday at Lucas Funeral Home in Hurst. Memorials: To honor Wayne's memory, memorials may be made to the Messianic Jewish Bible Institute, P.O. Box 535185, Grand Prairie 75053; or to the World Bible Translation Center, 4028 Daley Ave., Fort Worth 76180. Wayne was born Jan. 3, 1933, in Temple. He graduated from Temple High School in 1950, received a B.S. degree from Middle Tennessee State University in Murfreesboro and after serving as an officer in the U.S. Army in El Paso, earned an M.Ed degree from Sam Houston State University in Huntsville. His entire working career was dedicated to education, first as an instructor in the public schools of Belton and Port Lavaca, then as instructor and administrator at Angelo State University in San Angelo. He became the first registrar at the Northeast Campus of TCJC in 1968. In 1970, he was designated district director of planning where he served continuously in that capacity until his retirement in 1991. During his tenure, he was primarily responsible for planning the buildings of the Northwest Campus, the May Owens District Center and numerous buildings on the Northwest and South campuses of TCJC. In 1976, he was additionally named the first bursar of the Northwest Campus and later named district director of purchasing in 1988. Throughout his educational career, he participated in various professional organizations, was a former member and board member of the Eastside Fort Worth Rotary Club, and served as president of the TCJC Retirees Organization from 1997-98. His family and peers often sought his counsel, because of their respect for his leadership and wisdom. He was a longtime member of the Richland Hills Church of Christ and was a member of Gateway Church in Southlake at the time of his death. He married the former Carol Joyce Williams of Orlando, Fla., in Nashville, Tenn., in 1955. (For more information on Mr. Wilks' last days, read at bonya.wordpress.com). Survivors: Loving wife of 52 years, Carol; son, Wayne Wilks Jr. and wife, Bonnie of Euless; daughter, Ginger Morton and husband, T. Scott of North Richland Hills; sisters, Mary Lynn Gambill and husband, Jack of Murfreesboro, Tenn., and LaRita Cartwright and husband, Tommy Cartwright of Troy; brother, Ed Wilks and wife, Becky of Belton; sisters-in-law, Meredith Rubar of Harpersville, Ala., and Robin Williams of Atlanta, Ga.; grandchildren, Julia Wilks, Taylor, Trenton and Trey Monts, and Abigail Morton; and many nieces, nephews and friends.

NORTH RICHLAND HILLS -- Wayne Dean Wilks Sr., 74, a beloved husband, father, grandfather and friend, went peacefully home to be with his Lord on Sunday, Dec. 16, 2007, in Fort Worth. He was a retired administrator at Tarrant County Junior College.... View Obituary & Service Information

The family of Wayne Wilks created this Life Tributes page to make it easy to share your memories.