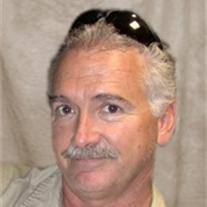 William Eugene Rushing, also known as Gene Rushing, passed on to be with his Heavenly Father on 10/22/2011 after 8 months of battling Stage 4 brain cancer. He was born on 12/14/1953 in Orlando, Florida but grew up in Tennessee where he met his precious and highly cherished wife Candy in high school. They have been married for 33 years. Gene was an electrician for American Airlines since 1989. He was known for his hard work, his warm personality and contagious sense of humor. He had a passion for Israel, having traveled there countless times, really loved working on old airplanes, especially the DC-3, and enjoyed sky-diving. He and his brother Bobby loved being part of the crew support for their brother Chris who yearly flies his plane at the Reno Air Races in Nevada. However, Gene's life's passion was reflecting the light and love of His Savior Yeshua (Jesus). Despite severe weakness and hard trials, his spirit was very high and he maintained that great sense of humor. Gene was an Elder and a leader in the Praise and Worship ministry at his congregation. During his sickness, he was always expressing thankfulness to his Lord for being there with him in the midst of the storm and for strengthening him, body, soul and spirit throughout this entire process. While many are confused and hurting, Gene's every step was pre-ordained by God. Corrie Ten Boom has said, "There is no panic in Heaven, only plans." Gene's prayer was that all who knew him would have fellowship with his loving Savior and live a life that reflected that. He learned and chanted in Hebrew the Aaronic Benediction which was a priestly blessing given by Yahweh God in Numbers 6:24-27 as a blessing over His people. We can still hear Gene beautifully singing the following words: "The LORD bless you, and keep you: The LORD make his face shine upon you, and be gracious unto you: The LORD lift up his countenance upon you, and give you Shalom (peace)." Surviving family members include his beloved wife Candice (Candy) Ann Rushing, his daughter and her husband Lindsey and Jason Hernandez, his son Taylor Rushing, his granddaughter Chloe Rylan Rutledge, his mother Mary Ann Farris, his brothers Chris Rushing and Bobby Farris, his sisters Kellie Earls, Michelle Yuzamas, Lee Ann Hill, and Judi Tilton. He is further survived by nieces, nephews, other relatives and many friends. He was preceded in death by his father, William Eugene Rushing Sr., and his brother Steve Rushing. His family thanks all who helped them through this difficult time. They invite all of his friends, co-workers, and family to the memorial service/going-home celebration to be held at The Hills Church of Christ at 2501 W. Southlake Blvd., Southlake, TX 76092 on Saturday, 11/5/2011 at 5:00pm. The family is putting together a memory book and would love for you to send them an email or letter by mail telling them about the way Gene affected your life, such as funny memories or special moments. The email address is [email protected] and their address is 1313 Ottinger Rd., Roanoke, TX 76262.

William Eugene Rushing, also known as Gene Rushing, passed on to be with his Heavenly Father on 10/22/2011 after 8 months of battling Stage 4 brain cancer. He was born on 12/14/1953 in Orlando, Florida but grew up in Tennessee where he met his... View Obituary & Service Information

The family of William Rushing created this Life Tributes page to make it easy to share your memories.