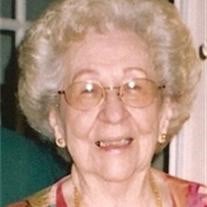 HURST -- Wilma Elliott, 89, a loving mother, grandmother, great-grandmother and friend, passed away Wednesday, Aug. 11, 2010.        Memorial service: 2:30 p.m. Sunday at First Baptist Church of Hurst.        Memorials: Should friends desire, memorials are requested to the church in her memory.        Wilma, the daughter of Leonard and Nettie Barclay Barnes, was born May 10, 1921, in Dexter. She grew up in Gainesville, where she graduated from high school. She and Jim Elliott married Aug. 1, 1942, and had 44 wonderful years together until his death in 1986. Wilma worked in various capacities of the Gainesville courthouse for over 50 years and retired in 1993. She was a member of First Baptist Church of Hurst and the Order of the Eastern Star. Wilma lived at Parc Place Retirement Community for a little over five years and made many wonderful friends.        Survivors: Daughter, Linda May and husband, Ron; son, Richard Elliott; grandchildren, Ashley Wade and husband, Cliff, Grant May and wife, Jennifer, Blaine Elliott and Barry Elliott and wife, Glenda; and great-grandchildren, Natalie and Campbell Wade, Lilly Paige May and Melissa Elliott.

The family of Wilma Elliott created this Life Tributes page to make it easy to share your memories.