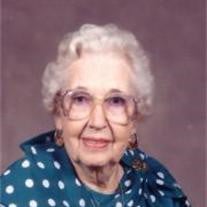 FORT WORTH -- Merle Lawler Henson, 98, a woman of indomitable spirit and deep love for her family, died peacefully Thursday afternoon, Aug. 30, 2007. Funeral: 1 p.m. Saturday in Shannon Rose Hill Memorial Park. Visitation: Her family will receive friends at the home of her daughter and son-in-law after the service. Memorials: Consideration of contributions to a charity of one's choice, in memory of Merle, is suggested. Born in Gorman on March 16, 1909, Merle was the daughter of W.H. and Gertrude McMullen. She married Clinton Lawler in Dallas and raised two daughters there and in California before moving to Fort Worth in 1942. Following the death of Mr. Lawler, Merle operated the C.L. Lawler Insurance Agency. In 1967, Merle found happiness again when she married Bill Henson. They enjoyed years together traveling across the United States and Canada before Mr. Henson's death in 1988. Merle was remarkable woman who made the best of whatever life handed her. Her zest for life came from her faith, her love of family and her ability to find joy in the simple thins of life. Children, grandchildren and great-grandchildren were all blessed for having her in their lives. Survivors: Her daughters, Erma Jeane Bell and her husband, Joe, of Fort Worth and Betty Tolbert and her husband, Bill, of Phoenix, Ariz.; grandchildren, Kay Perry and her husband, George, Dan Boggus and his wife, Cindi, Steve Boggus and his wife, Sarah, Scott Tolbert and his wife, Cathy, and Jeff Tolbert and his wife, Cary; great-grandchildren, Ashley and Paxton Perry, Kris Boggus, Nick Boggus, Cole Boggus, Jessica Tolbert Gilbert and her husband, Corey, and Kyle Tolbert; brother, Dub McMullen and his wife, Shirley, of Cherry Valley Calif.; and niece, Patricia Elevia of Cherry Valley, Calif. Robertson Mueller Harper Funerals & Cremations 1500 Eighth Ave., 817-924-4233

The family of ZELLA HENSON created this Life Tributes page to make it easy to share your memories.

FORT WORTH -- Merle Lawler Henson, 98, a woman of indomitable...